Here is what beginners need to know about Shopify application development

Shopify is a great e-commerce platform with a lot of useful features out of the box. Working with product catalogs, accepting payments, conducting marketing campaigns, applying and customizing themes — all these functions are available to online merchants right after subscribing to a Shopify plan.

Even with all these features in place, though, merchants may soon discover they need more than the platform provides off the shelf. This is when Shopify app development comes into play.

Building apps has turned into a very lucrative business. According to the official Shopify site, almost 90% of online merchants use apps on their stores. Nearly 85% of apps have brought their developers money. All these numbers illustrate the increasing popularity of Shopify app development.

We Have a Secret to Share: A Shopify App Is Just a Web Application

Many people think that Shopify uses some kind of proprietary coding language in a manner similar to Apple that uses Swift for building iOS applications. The truth is, though, that there’s no single stack of technologies developers must use. This is what makes this platform so flexible.

Still, Shopify is a Ruby-based platform. If this programming language is your choice, it will give you an ability to use frequently updated libraries and tools officially supported by Shopify.

A reasonable question is, “How, then, is Shopify app development different from ordinary web app development?” The answer is that Shopify apps get connected (after Shopify authorizes the app to do so) to online stores through the official Shopify APIs and exchange data with them in the JSON format through the https protocol.

In this way, they can perform all kinds of tasks, depending on the services provided, such as:

Shopify App Development: Not All Applications Are Created Equal 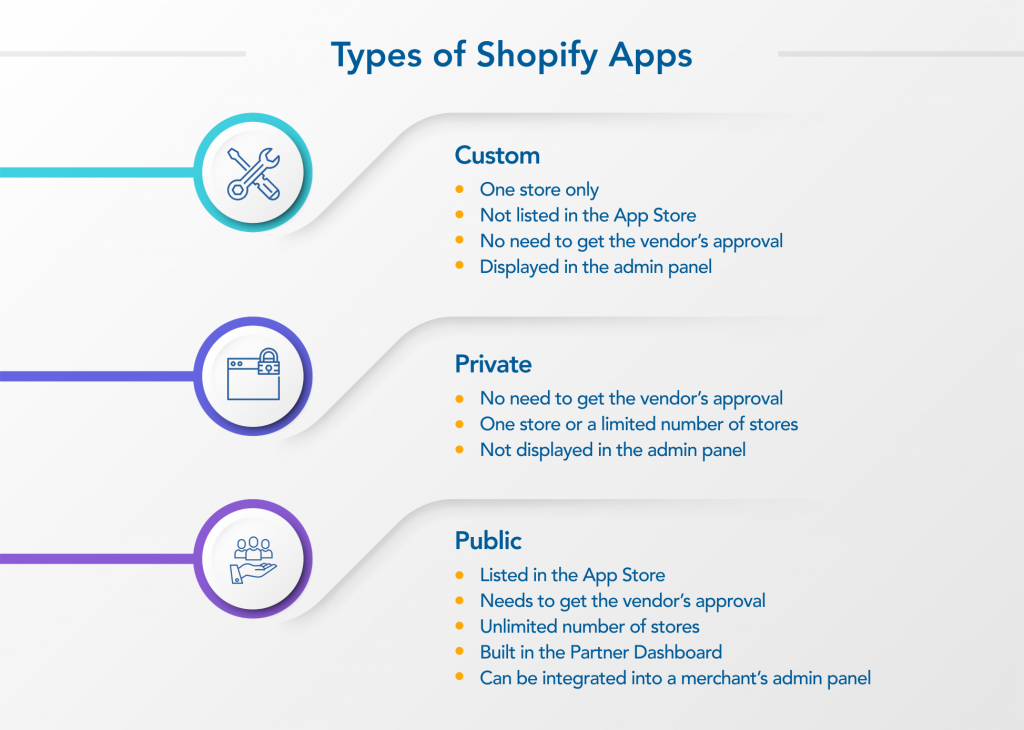 As we said earlier, Shopify apps can use the same Shopify REST APIs to interact with online stores. However, they are not identical when it comes to delivering them to customers. Shopify apps fall into 3 groups:

Here is what you should know about the three types.

We’ll begin by discussing the most “secret” type of a Shopify app — a custom application. If an online store owner needs something truly unique, something that no other store has, they can order building this type of app.

No other merchants can use it. It’s meant for one and only one store. Period. A custom Shopify app developer should also know that they can’t distribute their application through the official Shopify site or use the Billing API to accept money from merchants. Programmers build apps of this type in their Partner Dashboard.

On the bright side, there’s no need to submit a custom app for approval by the platform. Once the merchant likes what you’ve built, you’re good to go. In addition, custom apps are displayed in the admin area thanks to Shopify App Bridge, a JavaScript library for embedding apps in the administration panel.

The second category of Shopify apps on our list is private apps. They are, in many ways, similar to custom apps, but do differ in certain aspects. As for the similarities, Shopify private app development doesn’t require submitting apps for validation by the vendor. Besides, developers can’t distribute private apps through the official Shopify App Store either.

If you want your app to be accessible to as many Shopify online store owners as possible, choose the Shopify public app development way. Public apps are placed in the App Store catalog according to their area of application. Customers can freely purchase them through this site.

The number of stores where a publicly listed Shopify app can be used is not limited and they have to receive the green light from the vendor.

Our team has vast experience creating custom Shopify themes and optimizing sites based on this e-commerce platform. Talk to us about your problems or ideas. Helping your business grow and prosper is the first item on our list of priorities!

What is a Shopify app?

A Shopify app is an ordinary web application. Developers can build apps with the tech stack of their choice on their own machines and run them on their own servers. What makes Shopify application development different from building standard web apps is the use of the official Shopify APIs.

Is there a specific stack of technologies required for Shopify development?

You use any programming languages, frameworks, or libraries to create Shopify apps. Ruby, PHP, React.js, or vanilla JavaScript — take your pick. Remember, though, that Shopify is a Ruby-based platform.

Where are Shopify apps hosted?

After programmers develop an app for Shopify, they host it on a server of their choice and get it connected to an online store by means of the Shopify REST API. 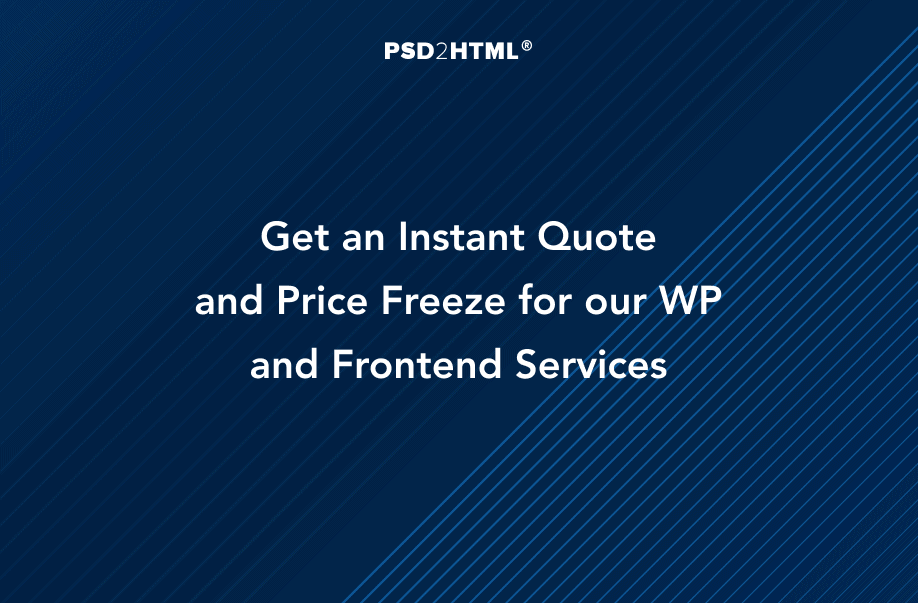 You might know that we completely revamped our Frontend and WordPress ORDER NOW pages back in March this year. We removed a number of outdated parameters, improved the arrangement of basic and advanced options within the forms, added the ASAP service toggle for urgent projects, and introduced some other important changes. We did all that […] 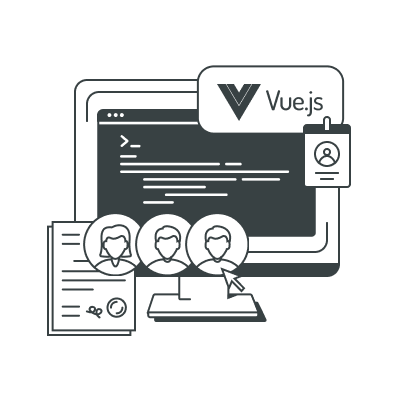 6 Questions to Ask Before You Hire a Vue.js Developer

Vue.js is a cutting-edge frontend technology for building highly interactive websites and apps. If you are undecided whether you need to hire Vue.js developers for your next project, this post will dispel your doubts. 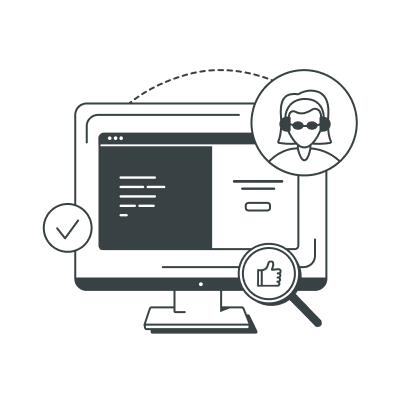 What is web accessibility? Why is it important to your business? How to make your website more accessible? Read this post for the answers.